Surau at centre of land controversy to be demolished soon, says Kedah MB 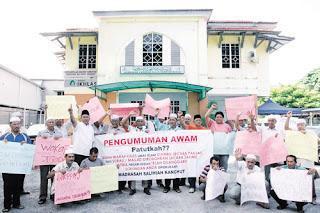 Menteri Besar Datuk Seri Azizan Abdul Razak has allowed the contractors of a development project to proceed with the demolition of the Madrasah Salihiah surau, despite the possibility that the state government could be slapped with legal action by the surau's action working committee.
He said the demolition could be performed any time soon even if the case was heard in court.


From his understanding, the injunction filed recently was not to stop the demolition but to question the sale of the land by the state to the public sector.
"The surau's activists have claimed that the sale went against the National Land Code," Azizan said after chairing the state executive council meeting here Wednesday.
He was commenting on the latest development in the surau case after two committee members and two descendants of the original land owner filed a fresh legal suit against the state.
The surau is at the heart of a mixed development project in the city centre here.
The state has allowed the developer to demolish this place of worship but in return, a new surau is to be built on the ground floor of the proposed shopping mall.
Committee member Jamludin Murad, 67, had filed the suit previously on his own but the revised suit included the names of another member and two claiming to be descendants of the original land owner.
The three new plaintiffs are Fadzil Ishak, 69, and twins Fidel Firaidi Mustafa and Fidel Firaidid Mustafa, both 49, who are reportedly the descendants of the land owner.
The owner had reportedly donated the land to be used as wakaf (endowment) land for the surau.
The case is scheduled to be heard on June 4 at the High Court here.
Posted by Suara Anak Muda at 12:28 AM