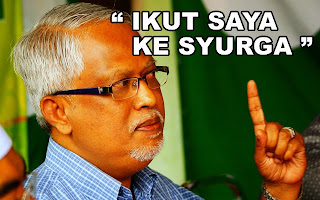 Forty-three members from the Kubang Buaya PAS branch of the Pokok Sena division have applied to join Umno as they were disappointed with the PAS struggle as well as the party's failure to look after their welfare. They handed over their application forms to the Pokok Sena Umno division head, Datuk Ahmad Lebai Sudin at a simple ceremony in conjunction with the 66th anniversary celebration of Umno at Kampung Kubang Buaya.

The group's representative, Abdul Rahim Yahya, 47, from Kampung Balik Hutan, in the mukim of Derga said that their decision was not influenced by anyone but upon realising the need for the survival of the Malay dominance.

"PAS has now changed a lot. Previously, the party leadership propagated the cause of Islam but their leadership had been disputed after they collaborated with the DAP which clearly rejects Islam.

"In this regard, Umno's stand is more clear and its leaders are sincere in empowering Islam besides looking after the party members," he said when approached after handing over the application form.