Hudud: A Shadowplay By PAS To Win Malay Heartland 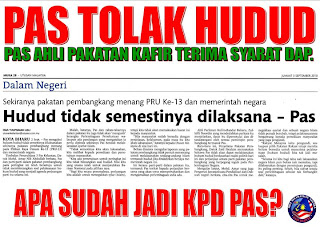 Is PAS really pursuing Islamic law (Hudud) and Islam as 'addin' (way of life)? But PAS has yet to make inroads with Hudud laws in Kelantan, which it has ruled for 21 years since 1990, Kedah (since 2008) and Terengganu (from 2004 till 2008). However, PAS might have to forget the burning desire to implement Hudud laws and an Islamic state as long as it is still in the opposition pact, said National Defence University of Malaysia senior lecturer Dr Mohd Ridhuan Tee Abdullah.


"PAS' opposition partners are never sincere and they just clamour for power. Even if they come to power, PAS will be sidelined. Hudud laws will be merely wishful thinking.

"Ironically, I am sad as PAS is being influenced and cajoled by those who are against Islam," he told Bernama.

The Kelantan State Assembly unanimously approved the Syariah Criminal Offences Enactment II in 1993 which encompasses Hudud law, but it was never implemented.

Minister in the Prime Minister's Department Datuk Seri Mohamed Nazri Abdul Aziz on Dec 15 said if it was true that PAS' Constitution is based on the Quran, why blame the Federal Constitution for not being able to introduce Hudud laws as the party could have implemented it in Kelantan and Kedah.

With strong objections from the DAP and Parti Keadilan Rakyat (PKR), how would PAS be able to implement Hudud laws and an Islamic state if the opposition comes to power?

However, PAS president Datuk Seri Abdul Hadi Awang, on May 9, played down the issue by saying that Hudud laws was not a priority although it would be implemented if the opposition came to power.

This runs smack into an inherent conflict on the stand and consensus reached by the Pakatan Leadership Council on Sept 28 last year which pledged that the alliance would not implement Hudud laws as proposed by PAS, as it does not conform to their joint policy, the Federal Constitution and their Orange Book Agenda.

Thus, when PAS repeatedly chanted Hudud laws, political observers felt that it was merely political rhetoric to appease its supporters without any conviction to make it happen.

The observers also questioned why PAS had not tabled a motion in Parliament to amend the Federal Constitution to make way for Hudud laws.

Bar Council president Lim Chee Wee, on Sept 30, was quoted as saying that Hudud laws, if implemented only for Muslims and not non-Muslims, would be against Article 8 of the Federal Constitution.

If Muslims are governed by two forms of prosecution or conviction, namely under Hudud laws and the Penal Code, it ran contrary to Article 7 (2) of the Federal Constitution, he added.

On Oct 2, DAP chairman Karpal Singh vehemently said that the DAP would oppose Hudud laws if the opposition get a two-thirds majority in the next general election as it would erode the confidence of the people because not all people were for Islamic law.

Universiti Teknologi Mara Dungun political science lecturer Che Hamdan Mohamed Razali said PAS should have tried to implement Hudud laws in Kelantan and Terengganu and not give excuses that it was objected by the DAP and PKR while the federal government was against it.

"The on and off statements on Hudud is a shadow play put up by PAS. PAS seems afraid of hurting its partners in the opposition," he said, adding that as long as PAS remained in the opposition, it would compromise on its struggle to uphold Islam.

Universiti Sains Malaysia's School of Social Sciences lecturer Prof Dr Ahmad Atory Hussain said PAS, PKR and the DAP would continue to perform shadow play to hoodwink the people as they needed each other.

"They need each other as they are poised to chase their dreams of becoming the ruling party.

"However, I'm sure the people understand the political forays unleashed by PAS. If PAS really wants to implement Hudud law, of course, the DAP will leave the pact," he said, adding PAS might lose more seats if it continued to bow to the demands made by its partners in the opposition.
Posted by Suara Anak Muda at 3:43 PM